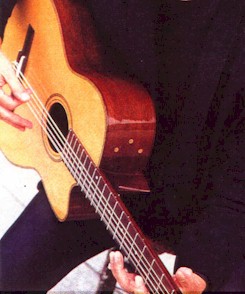 It’s rather mysterious as to how things have turned out for me. I was a kid in Texas sitting on a fire hydrant watching the cars go by in 1963. Up to that point life was mostly about canned laughter on t.v. and watching the cars go by. I wanted to be a singer. Nobody took it all too serious. Music was something you did for a hobby. And sang in church or long car rides.

My dad had a deep bass voice. He died of a self-inflicted wound in 1964, just when we had moved across town. My mom went to work but still sang in the choir. My sister and brother and I were raised in the same neighborhood throughout all of our schooling. My brother played guitar in a ‘combo’. I rode my bike everywhere that I could. Then I got a car.

My sister left a guitar behind that was missing some strings and I needed something to sing with. That’s where the 4 string guitar technique comes from. All in all, there wasn’t much encouragement coming from home and I needed to find out what was going on. I graduated and moved out.

The next couple of years were spent playing out for who’d ever listen. I made my way into some ‘happy hours’ and doing back-up vocals for studios. Made demo tapes. And hung around lots of music and musicians. My sound was more folk than disco and more jazz than country. It didn’t fit the scene in Dallas at the time. So I moved to New Mexico.

Ruidoso was a small mountain town in the late 70’s and we all had some discovering to do. I was in a duo and a band and still making demo tapes in Dallas. I took reel to reel tapes to L.A. and did most of the things a player will do when everything seems possible. I moved around a lot for nearly fifteen years. Some friends of mine let me use their mailing address and there was always a spare bed there for me. Most of the songs on “Gypsy Alley” come from those days. There are some demos floating around but it wasn’t until I stopped for awhile in Santa Fe that the decision to record ‘something I could sell off-stage’ came to be a reality.

I was playing regularly at El Farol and rented a place on Gypsy Alley there. I won a goldfish at the fair and had to take care of it. I got a dog. Eric Larson owned a studio in Albuquerque and offered me a recording deal with him as the producer. We recorded at night when the studio wasn’t booked. The recordings took around 9 months to complete and package. It took some 6 more months to get an offer from a California label. Then, another year for nothing to happen fortune or fame wise.

Bruce Dunlap, an amazing guitarist, turned me onto Chesky Records out of New York. I was still playing the local bars and whatever else I could do musically to pay the rent. It took almost a year for me to sign with Chesky. I had never heard of Audiophile. Or recording direct to disc. But, standing on the streets of New York, looking up and down at all the action was pretty exciting. So was BMG studios. So, I let the dream kick in again.

Now it is the beginning of the 90’s, whatever that was. I’m moving around a lot again, starting to tour Europe more, writing and recording more and missing my dog. I thought it might be best to move to a bigger city and packed up for San Francisco. First I’d go east and make a mini-tour of Texas and play a few places before heading further west. Never made it further west though.

Seana was born January 13th, 1994. I moved back to New Mexico to raise her and stay afloat musically. We lived at the foot of the mountain in Ruidoso. Three cds were written, recorded and toured during our years there.

In 1998, when she went to live with her father in Texas, I moved back to Santa Fe. That’s another long story put short. But, in truth as well as fiction, life does go on. We lost Peter,Jeffrey and Robo that year. Overdose, chili truck and sky-diving. I was still trying to figure out this playing in bars. I needed something good to happen.

Some good surprises were coming my way. Even though not having Seana with me was producing emotional levels that I don’t care to remember, the new abundance of space was soon to be filled. Soon, of course, meaning half a decade later.

The next and final 2 cds completed my contract obligations with Chesky. Something was telling me that I’d been ripped off in many directions by labels and touring companies. Maybe it was the fact that I was not making any money even though the cds were selling. I was touring the last one in Germany when Guenter Pauler, who was working sound for the concert, invited me to see his studio. Fortunately, I had the next day off. I was imagining a nice home studio with dats and reverb. Needless to say, Stockfisch is much more than that. At the end of our visit, Guenter said he’d like to record me. I said I’d like that and would think about it. I had almost come to a point of resolve in thinking there was more to life than signing well-worded-for-the-label contracts. So, I get home and he sends me a live recording from our concert there with Chris Jones adding some very tasteful guitar parts. And a one pager. A one page contract. Unheard of.

In September I signed with Stockfisch for the cd ‘Water Falls’.October I married Tiego inScotland. November we started the‘multitrack’ recordings with Chris Jones. B&W Speakers will be sponsoring our tour in May of this year. At least for now, I’m not scheduled to play any bars. I keep looking over my shoulder but am grateful for the good surprise. Thanks to all and to all a great journey or two …..